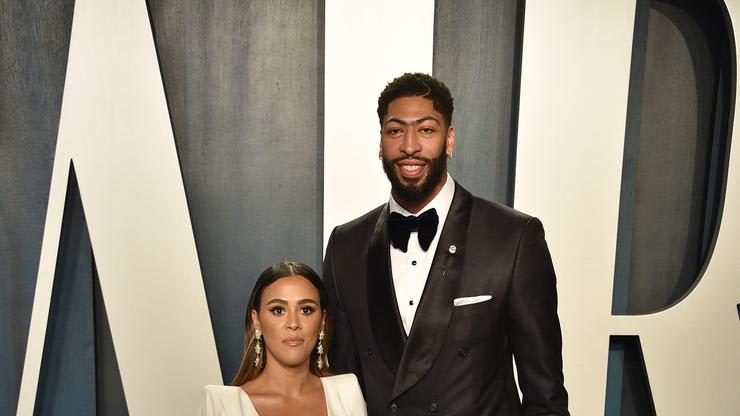 The Los Angeles Lakers superstar Anthony Davis has used the offseason not just to recover from injuries but to settle as a married man.

On Saturday, somewhere on Sunset Boulevard in Los Angeles, Davis tied the knot with his partner Marlen P. in an event attended by several Los Angeles Lakers teammates such as Russell Westbrook and LeBron James, as well as former Laker, and now Dallas Mavericks assistant coach, Jared Dudley.

Overtime.tv has posted a video of LeBron James and Russell Westbrook dressed in all black on their way to the wedding.

Yet, none of his current Lakers teammates was his best man. That duty was assigned to his former New Orleans Pelicans teammate who is now with the Memphis Grizzlies, Tim Frazer.

Davis was dressed in a tuxedo and a pair of Jordans and ended up singing to his newly wife.

The couple has been together since 2016 and have a daughter named Nala.

Among the other guests at the ceremony was Davis’ Kentucky coach John Calipari as well as the former Wildcats DeMarcus Cousins who was also with the Pelicans.

There are not many info on Davis’ wife Marlen P. since the couple has kept their relationship private. She is in her twenties and has a private Instagram profile with around 3.000 followers. (https://www.instagram.com/iammarlenp/)

Davis will have around ten days to enjoy a honeymoon with his lovely wife before showing of at the Lakers training camp for the 2021-22 season which begins on October 19th. The Lakers will host the Golden State Warriors at the opening night at the Staples Center.

The Lakers had a disappointing season as they lost to the Phoenix Suns in the first round of the Western Conference playoffs mainly because of Davis’ injury.

The team’s front office made huge moves in the first days of the offseason which made them the favorites to win the championship in the upcoming season.

First they traded Kentavious Caldwell-Pope, Kyle Kuzma and Montrezl Harrell to the Washington Wizards for the former MVP Russell Westbrook. Russ has averaged triple-double in four of the last four seasons for the Thunder, Rockets and Wizards and is expected to be the key addition to the team that will go for their 18th championship in franchise history.

One of LeBron’s best friends Carmelo Anthony was also brought in as a free agent from the Portland Trail Blazers. Both LeBron and Anthony are from the 2003 NBA Draft class and they finally will play on the same side in their 18th NBA season.

The Lakers also signed four of their former players, most importantly Trevor Ariza who was part of the 2010 championship team and Rajon Rondo and Dwight Howard who won the Larry O’Brien trophy with LA in 2020.

Kent Bazemore and Wayne Ellington are also returning to the ‘City of Angels’.

New faces on the Lakers roster are also Malik Monk who arrived from the Charlotte Hornets, Kendrick Nunn who played for the Miami Heat and the last addition DeAndre Jordan who spent a decade with the Clippers and played the last two with the Brooklyn Nets.

The Queen In Me Luxurious Hair Disrupting Hair Extension Industry

Fri Sep 24 , 2021
Now with The Queen In Me Luxurious Hair, anyone can get an amazing hair extension done at home. During the lockdown, many salons closed which […]